skip to main | skip to sidebar

In the Land of the Maya 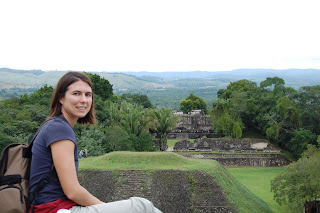 Cayo District, Belize - "You see one Mayan site, you've seen them all." That was the pronouncement of the young woman I met at our hotel when I asked about her trip.

In the course of the past week, I have visited four different Mayan sites in the Cayo district (not counting ATM) -- and I have proof that she is wrong. 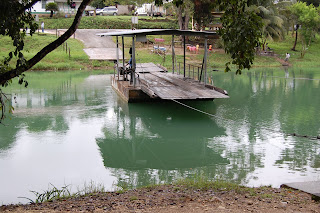 One of the highlights of Xunitunich is the hand-crank ferry that you have to ride across the Mopan River. From here, it is a one-mile hike up-hill through the jungle -- a wonderful place for bird sightings. The site itself is small compared to Tikal, for example, but still impressive -- especially for the tall pyramid known as Il Castillo. At the top of the tall tower, two sides are engraved with incredible friezes. Disclaimer: what you see is actually a replica, with the original re-buried about a meter underneath to better preserve it.

I was wondering around the tiny town of Bullet Tree Falls (in the rain), trying to figure out how to reach this out-of-the-way site. As if on cue, a friendly local boy rode up on his bike and offered to show me around town. Turns out, he is a guide (no wonder he is so friendly) and he is about to take a group to El Pilar that afternoon. Sometimes the world is so long. So I joined guides Teddy and Tony and their entourage. We drove about seven miles through the rain on a bumpy, unpaved road to reach this little-known site. Because I was the late-comer, I had to ride in the back of the jeep, but at least I was not driving (this time -- more on that later). 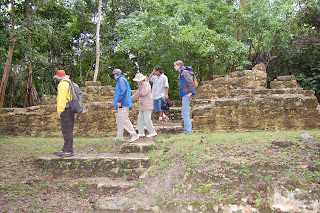 El Pilar is named for the reservoir that the Mayans had built on either end of their settlement. It is an unusual site in that it is largely unexcavated, meaning you find yourself walking around on jungle-covered mounds. You really have to use your imagination, but it also adds to the mystery of this amazing civilization.

One interesting note: much of this site has actually already been excavated. But the archaeologists got the information they could, then covered it back up - the better to preserve the remaining buildings. 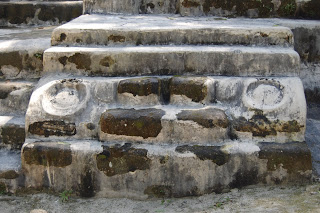 This small site is right outside San Ignacio, a 20-minute walk from the center of town. Nonetheless, it is often overlooked for its small size. On Jerry's first day, he spent about two hours wandering around this place by himself and did not see another soul.

But what is really distinctinve about Cahal Pech is that it is the oldest Mayan site in the Cayo district. Most of the sites date to the Classic Mayan period, which is from AD 200 to AD 600. But archaeologists have determined that Cahal Pech was inhabited as early as 1000 BC, which is known as the Pre-Classic period.

The difference in design is really noticeable, even to an untrained eye such as my own. The other sites are characterized by vast open plazas with grand temples at either end. The settlement at Cahal Pech still had plazas, but they were enclosed, with only one tall temple at the center of the complex. And while the carvings of the Jaguar god were still present, they were much more rudimentary.

Getting to Caracol involved three hours of driving on very bumpy roads. And this time, I was the driver. Not only that, I had to drive fast to keep up with my convoy. 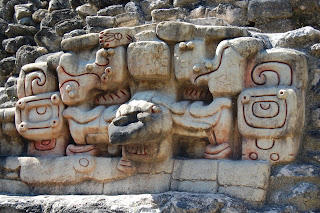 Tourists are not allowed to drive to Caracol by themselves. In recent years, tourists and guides on their way to Caracol have been robbed by armed bandits, especially in the very remote Pine Mountain Ridge. So the solution - which seems to be working - is to have everybody check in at points along the way. Then at the entrance to the most remote part of Pine Mountain Ridge, everybody meets for a convoy that is set to depart at a certain time - accompanied by armed park rangers.

Most of the other vehicles in the convoy were groups of tourists driven by guides who do this route several times a week. I think they must be used to the bumps, because they had no intention of slowing down for them! So my little Suzuki did have a tough time keeping up with them. That said, where one of the buses got stuck in the mud, the Suzuki ploughed right through with no hesitation. 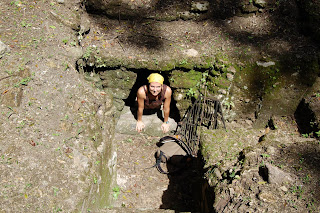 Caracol is the largest and most impressive site in Western Belize, filled with amazing friezes and engravings and hidden tombs. The centerpiece is the tall temple known as Canaa. At 141 feet, it is still the tallest building in Belize -- thousands of years after it was constructed! Anyone who climbs the super steep stairs to the top is rewarded with amazing views into Guatemala. We were also rewarded with a glimpse of two collared aricaris. 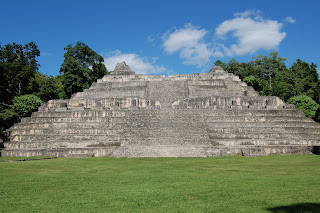 Mara Vorhees
is a writer and photographer who blogs about food and adventure around the world. She has written guidebooks about Belize, Brazil, Costa Rica, Morocco, New England, Poland and Russia for Lonely Planet.